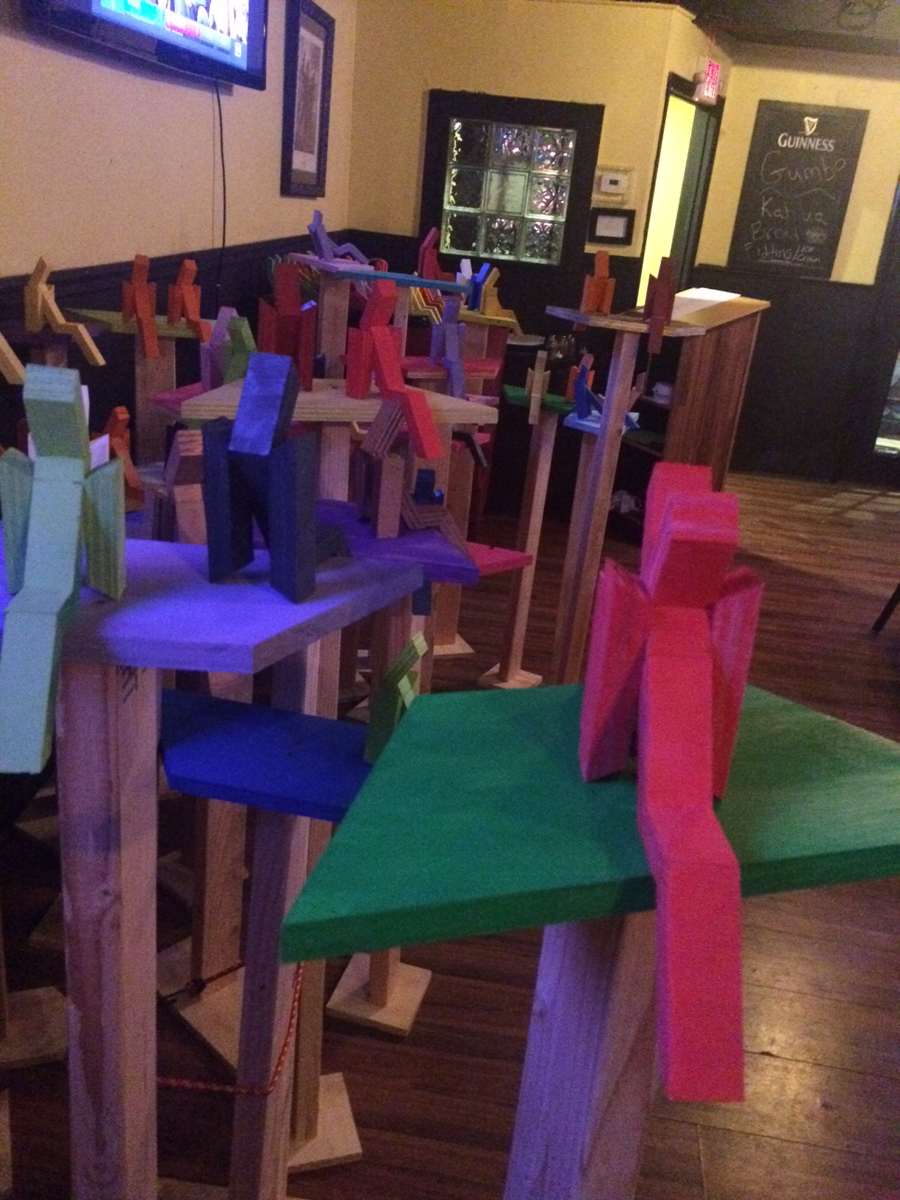 On March 3rd 2019, Spencer Soletto(Soletto) had another art show at Niks Raritan Pub in Raritan New Jersey. His sculpting abilities were on full display as he showed the community the new and improved Chillers. The Chillers are his signature multi-produced piece. Along with that, on display, were some specially made sculptures just for this show, and other pieces that he’s had for quite some time ready to show people.

After the initial setup, he stayed there for a little while just to make sure everything was the way he wanted it to be. Every detail counted. The placement of each sculpture was crucial, in order to be experienced in the best way possible. Although it amounted to one heck of a long day, it would be worth it in the end. No matter how long it took.

The Chillers, who were the stars of the show that night, were feeling a little chilly that day due to the incoming snowstorm. The temperatures were rapidly dropping and causing a stir in the community of Raritan, it’s neighboring communities, and the majority of the state. The Chillers were ready though. They were ready to show the people what their creator did to make them the most sought after engineered piece of art in New Jersey.

“The Chiller is a figure that’s not feminine or masculine. It’s just trying to be the embodiment of chill.” 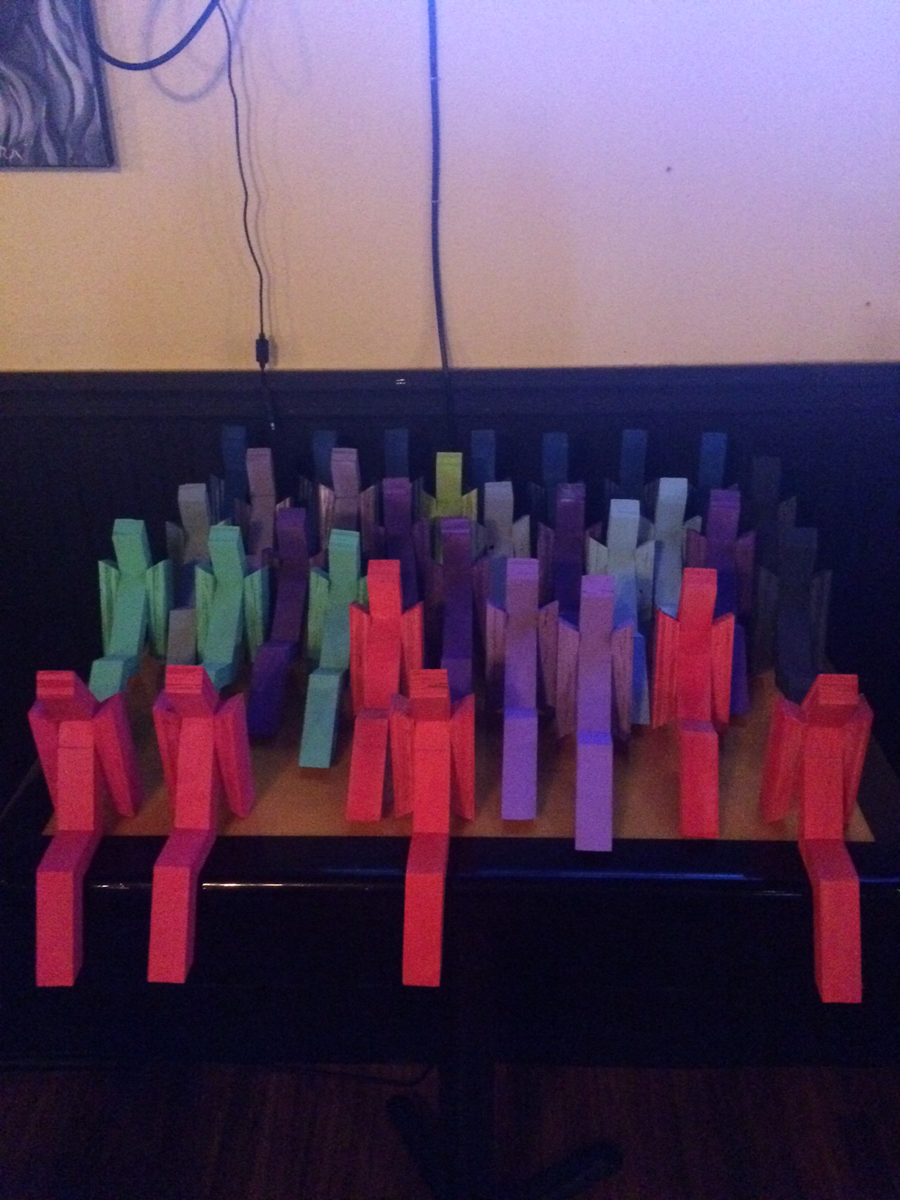 That evening, The Chillers, were gracefully perched up on their towers, that were strategically built by Soletto for them and the show, for anyone to see. They had a club box like view overlooking the bar. It was like going to Scotland and seeing the castles on one of their 790 islands.

The islands were clouded that evening though, as an epic snow storm raged through the Raritan Valley causing many people to stay in and pass this time. So the view was a little different for The Chillers and the people who came out and embraced the storm that caused a State of Emergency to be called.

The show went on though. 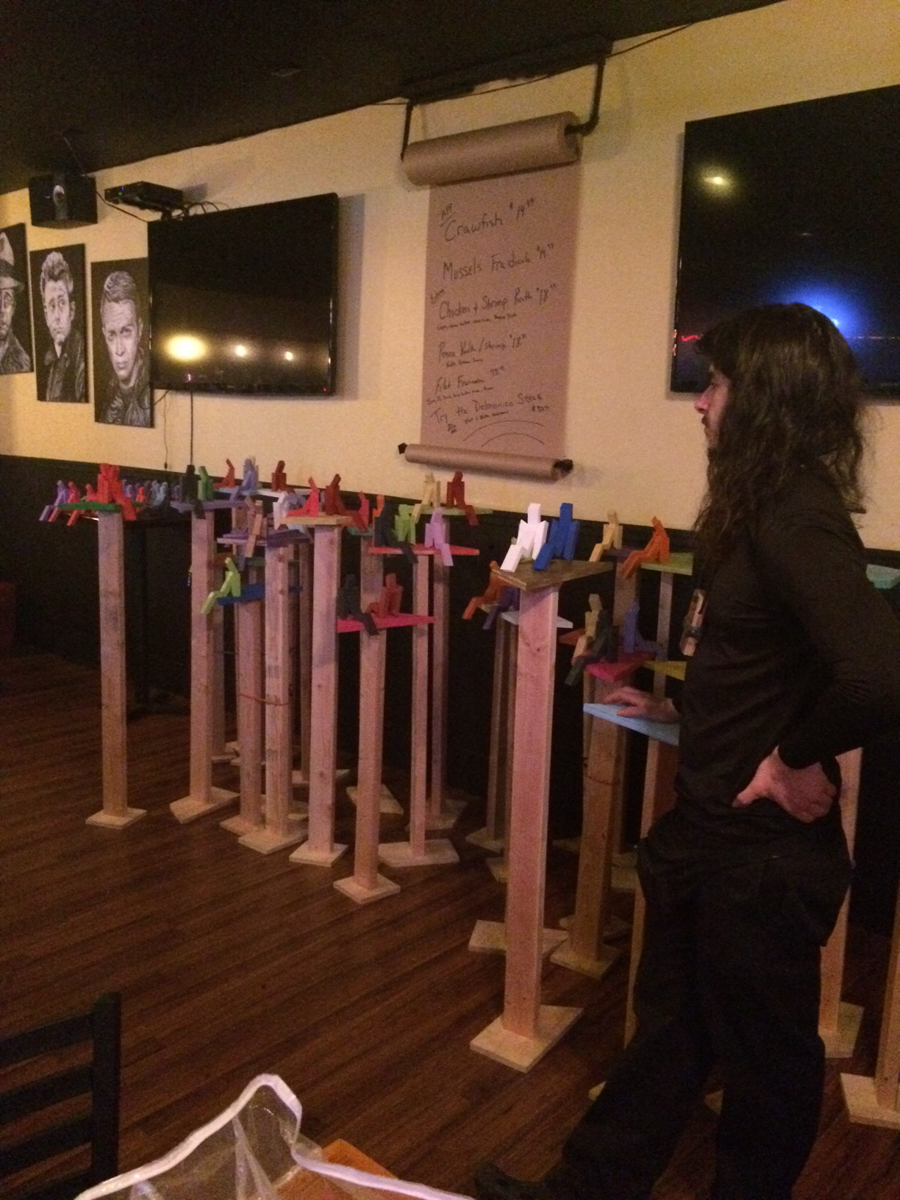 Now… it was time. The opening bell rang at 6pm on that Sunday for the first ever art show at Niks Raritan Pub in it’s tenure in the community. What was going to happen?

That answer would come to light after the show concluded...

Note- all quotes are by Spencer Soletto unless otherwise noted.

Haiku is a traditional Japanese poem. An ancient art that seems to have been forgotten by some people. Although in many places it has not and is still a flourishing form of art. Soletto is using this art to not only give as a gift to people but to change that persona and bring to light his multidimensional abilities as a sculptor.

Soletto, who had been practicing the art for a few years now, started to hand out his own Haiku to people he met throughout the community. He did this not only to connect with them but to give them a piece of his life experiences. 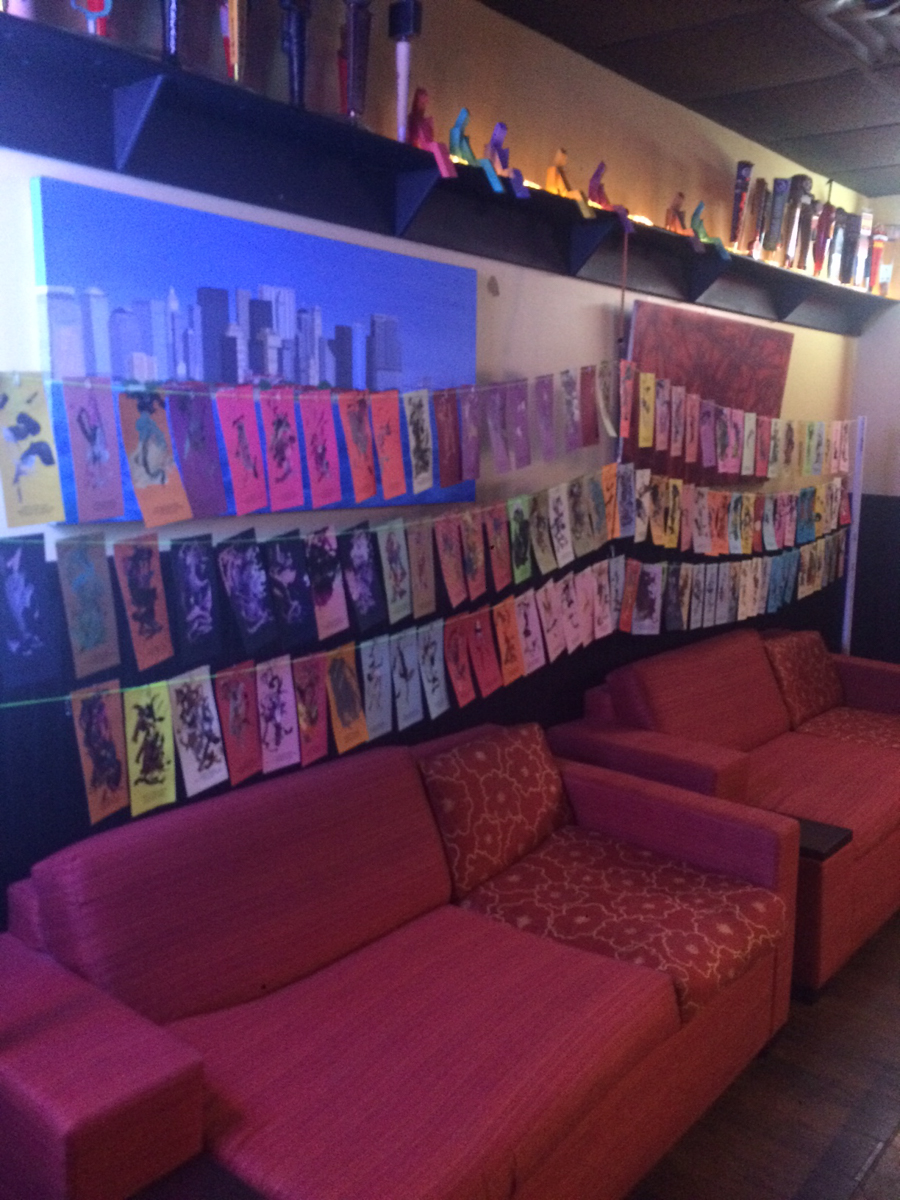 With 17 syllables, combined with some free flowing paint strokes, he tries to connect with the people he encounters. He knows that spoken word exchanges only can go so far. Although some people don’t understand, it’s okay, because the ones that do may connect and understand his work in a real special and unique way.

Each Haiku are small parts of him, his daily routine and just a part of the development of his work.

If you’ve ever been in Somerville, where Soletto is from and still lives, you may have seen him on the street, ready for a conversation and to show you his work. You may have seen him in one of the cafes around town hanging around with his work in hand. He’s always ready. He makes sure to always have a good stockpile of this Haiku and other works on him just in case he meets someone who is a little curious

Along with his imagination, he was inspired to create this piece once he realized the show was in a bar. With his engineering background and unique sculpting abilities he wanted to create something different from a traditional table for a game of beer pong.

“My intention was to make the beer pong table and do something different and to see how people interact with the difference.” 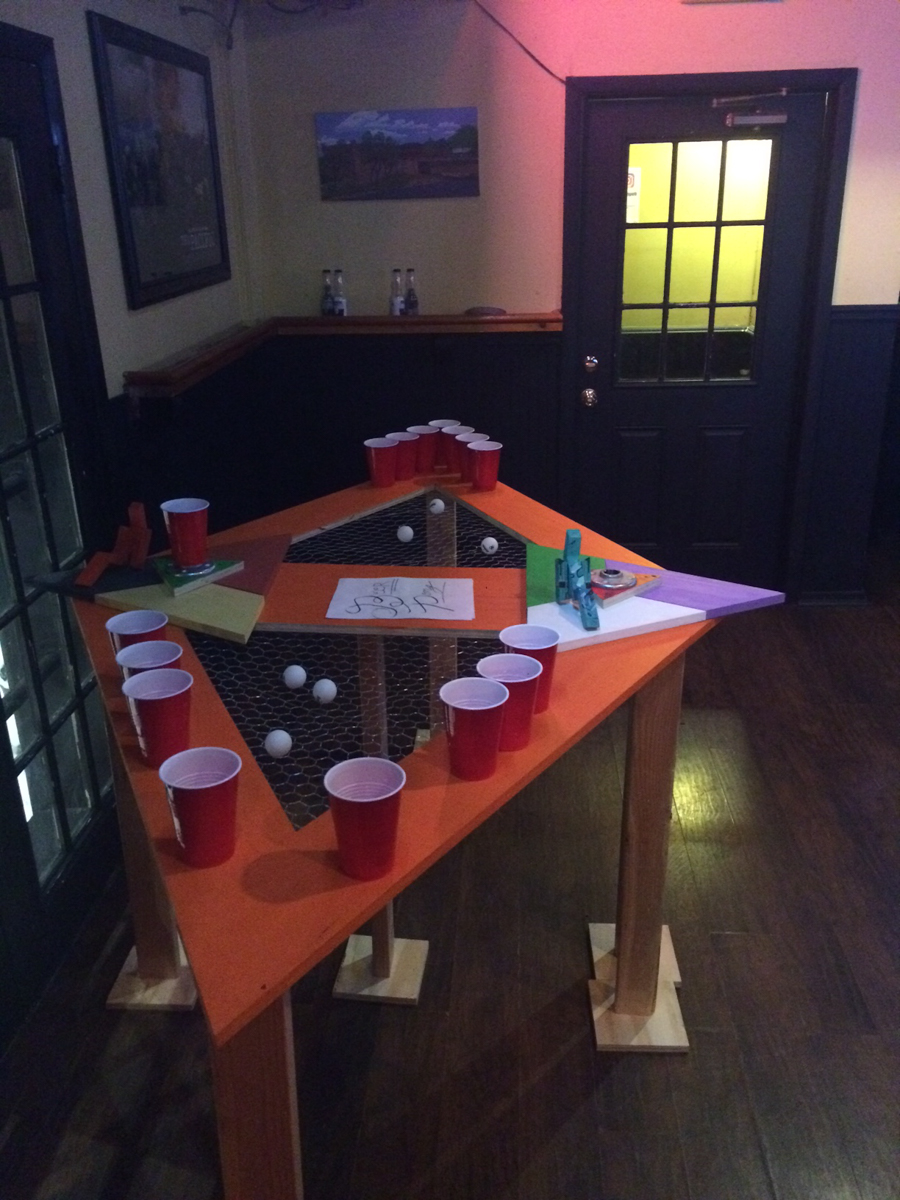 What you’re looking at is a diamond shaped beer pong table, with 2 equilateral triangles, it’s centers left void, and then replaced with chicken wire.

How do you play it? Well that’s what the sculptor wanted to know too. So he just set it up and let them figure out how to utilize his creation.

“It’s just a big version of the Chillers.”

Having an engineering background, the geometrics to scale his beloved Chiller design up to a seven foot mega Chiller, known by no other name than “The Big Chill,” was quite simple. When he got the idea to creating a bigger Chiller it also spurred more ideas.

“I wanted to take advantage of the space it occupied.” 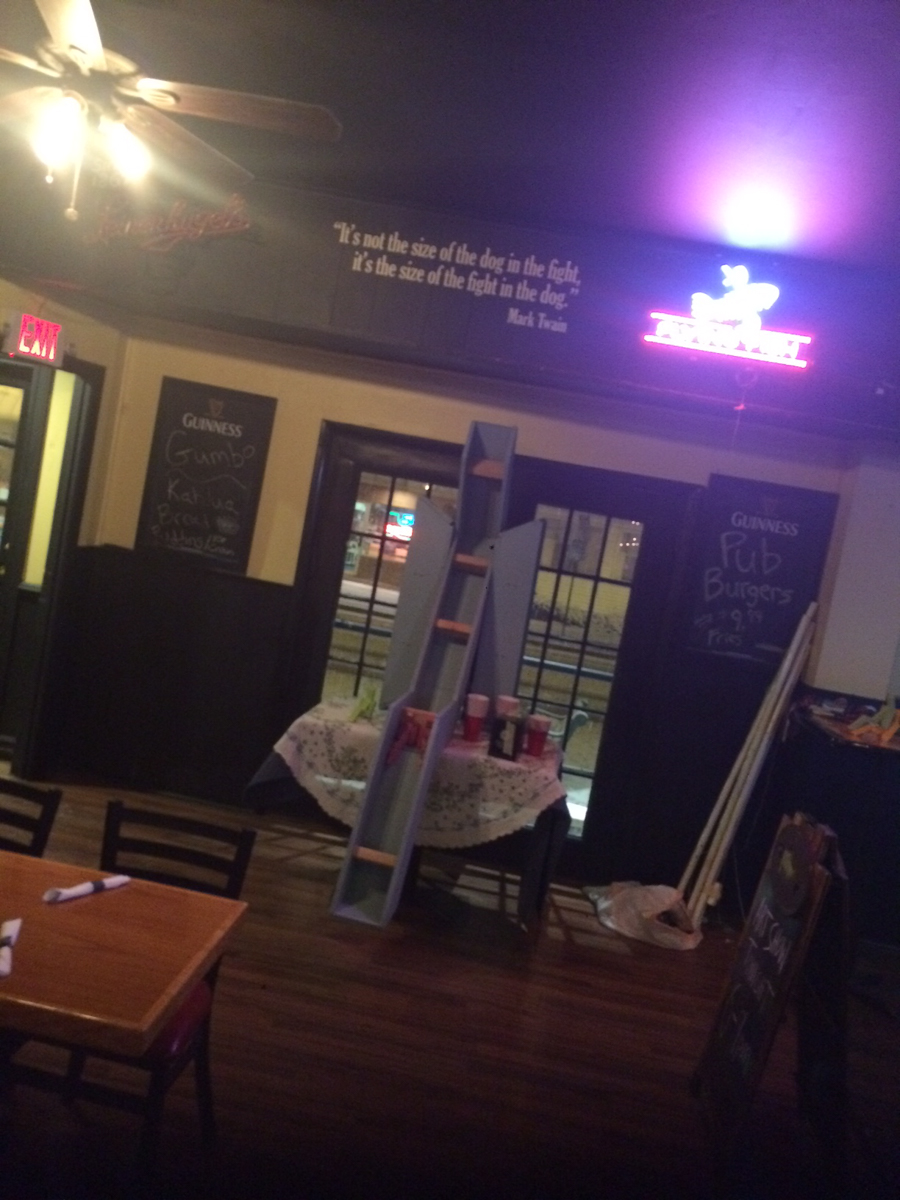 On this night too, the big chill played a nice part in reminding the people at the bar, that the snow storm was temporary and to remain cool calm and chill.

It was not only eye appealing, but it was a functional piece that could be used as storage for something or a place where you could put some family photos. The arms were hollowed out and ‘shelves’ were inserted into them.

Another, less known element of this sculptors work, is his love of abstract painting. It’s something he just gets lost in. His daily practice of Haiku actually helps him out with his abstract paintings.

“My painting is the most free. It’s not bound by any form. Through the chaos though,  I still try to find a natural balance.” 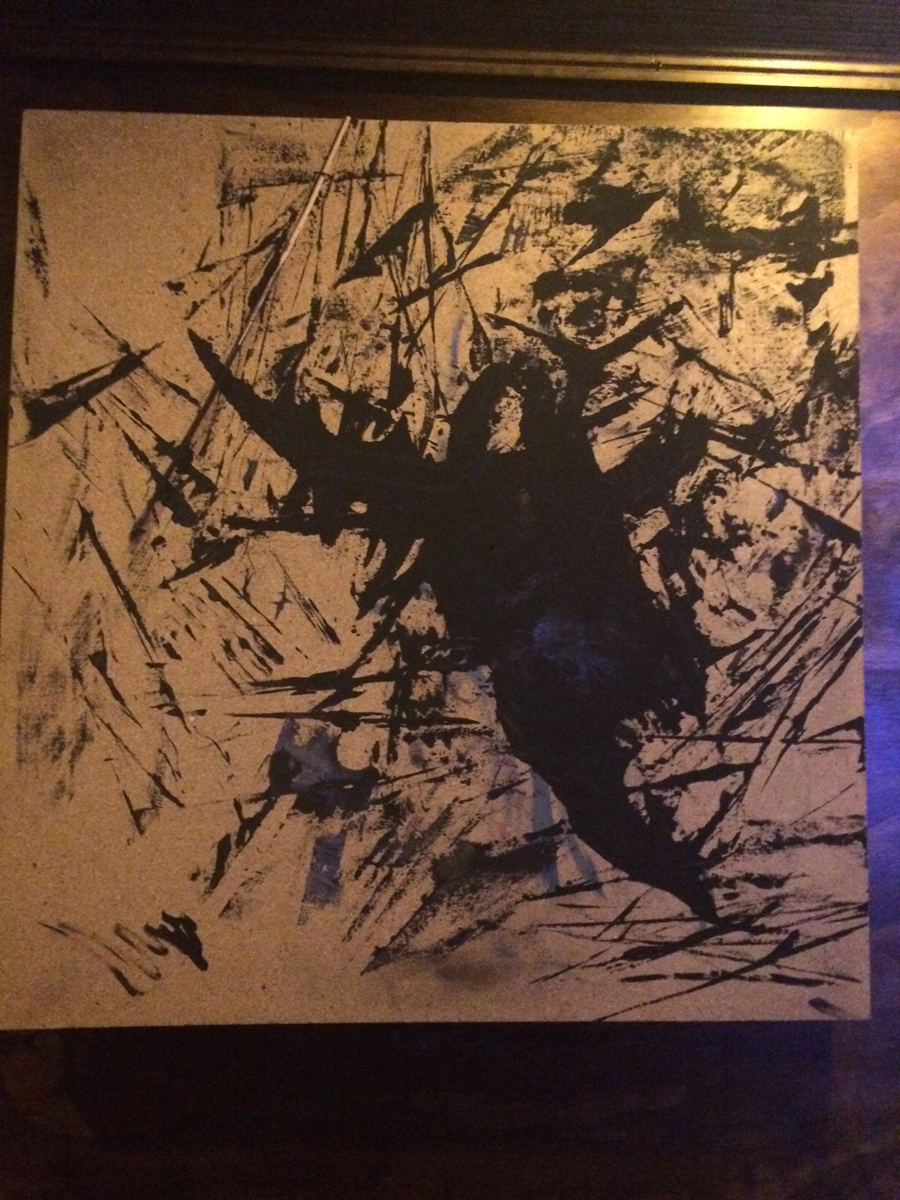 (purchased that night at the art show)

The Pub, at the time of the event, was serving a more American Style menu with a few  Greek and Italian dishes. Now, much like Solettos art work has evolved, they are cooking up some of the best Cajun style dishes in Somerset county. They do also hold some of the favorite dishes from the last menu and have added a Ribeye steak to the menu with their own special blend of spices.

So, although the storm continued to rage through the streets of Raritan that night, it didn’t sway the night from being a success. It was an opportunity that Soletto took full advantage of. Some new faces were met and some old ones came through to support the man who had this unique and powerful skill set. Soletto made the evening a success. It allowed him to create new works, test his abilities and even take a few risks. 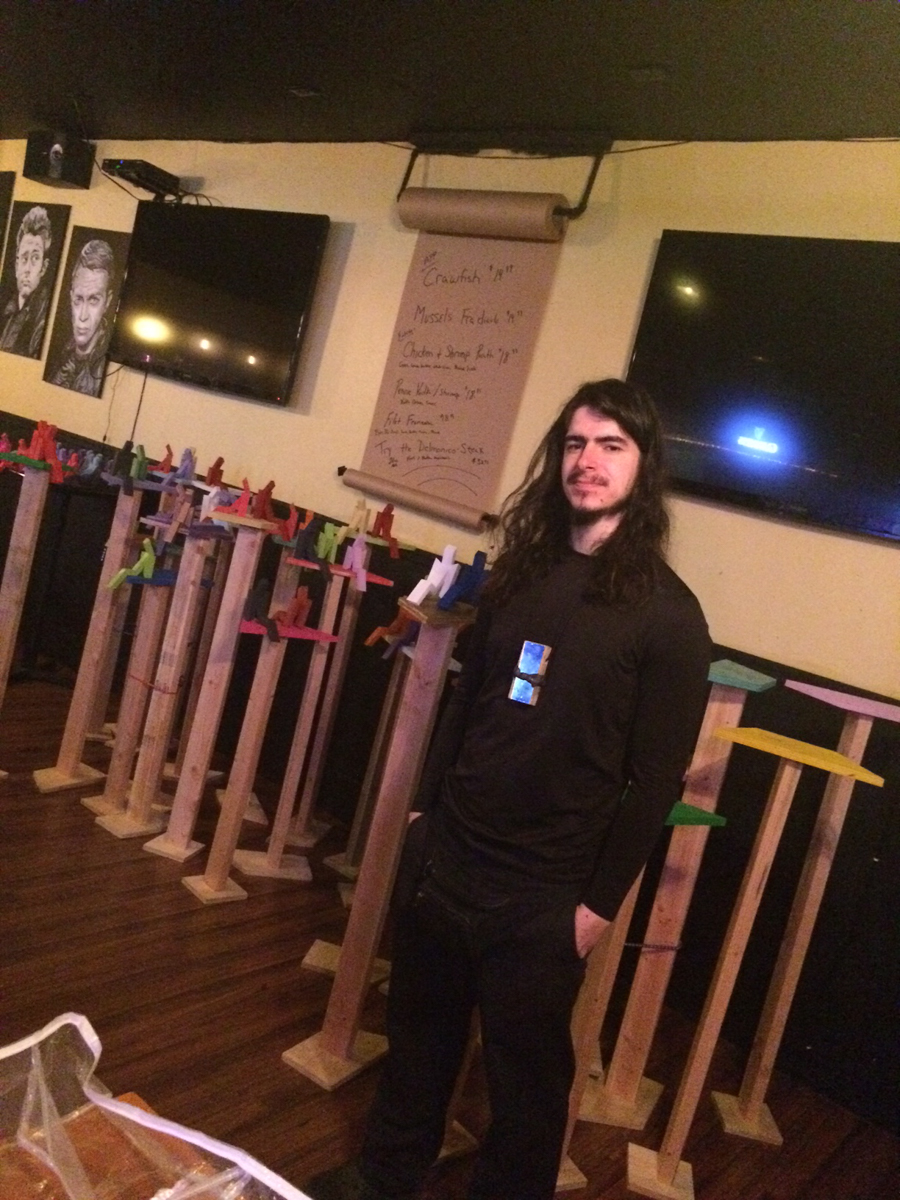 Through it all, except for some cancellations amidst the storm, also some Chillers who lost their balance and broke into a few pieces, the show went on without a hitch. The Chillers who lost their balance had to go to his shop to be repaired. Over a few drinks and food from The Raritan Pub, the Chillers, Haiku, Big Chill, Abstract Paintings, and the Diamond Beer Pong Table were seen in all of its glory.

It was an epic evening full of some of the most unique artwork in the county by one of the states rising sculptors.

Make sure to keep your eye out for this guy and his next show. There’s more pieces in the works, so get ready. Also, he’s experimenting with gardens in his work.

This email address is being protected from spambots. You need JavaScript enabled to view it.